Excerpts from an article by the Somerville News http://www.thesomervillenews.com/archives/26182

While miniature books are by their very definition are smaller than other books, they are every bit as collectible as their larger counterparts. In fact, collecting miniature books has become so popular that enthusiasts have even formed a Miniature Book Society.

Oftentimes people think they have a miniature book in their collection, but it is really just a small book, and not a true miniature. Usually, to be considered miniature a book must measure less than three inches, which is why some miniature books do come with a magnifying glass. Here are some examples from the Tara’s Palace Library 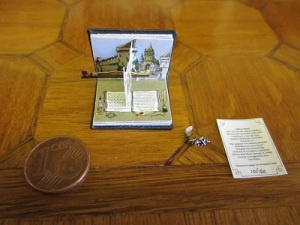 Throughout the 1400s and 1500s books were very expensive luxury items that were affordable only to the wealthy, privileged few. Because books had to be portable, mostly for students and people on pilgrimages, they began making them smaller. Some of the books measured four or five inches, but most were even smaller than that. In the 1700s and 1800s, miniatures began to be made mostly as novelty items. They used less paper and they were made in order to be carried or to be used as gifts.

Making a miniature book is very hard work because of the detail involved, but when it’s done right, the result can be truly amazing. Today there are still people who design wonderful miniatures.

Posted on April 23, 2012 by Tara's Palace Museum of Childhood

Next year is the year of the Gathering in Ireland.

Whether you’re Irish born, Irish bred or Irish in spirit, get involved and celebrate a year of Irish connections. The Gathering Ireland 2013 is about planning special events or Gatherings, driven by groups and communities of every kind that will highlight what is great about that community and Ireland as a whole.

Tara’s Palace is Ireland’s largest period doll house. It contains 24 stunning rooms, furnished in the Georgian tradition and featuring pieces by Fred Early, Michael Walton and John Hodgson to name a few. Tara’s Palace is part of the Museum of Childhood which features antique toys and dolls, historic childhood bygones and doll houses dating back 300 years.

Tara’s Palace Museum of Childhood www.taraspalace.ie is inviting Doll House and Miniature Enthusiast individuals or clubs from where ever you are in the world to Gather at the museum to share your knowledge and experiences and to celebrate all things miniature!

Tara’s Palace Museum of Childhood is situated on the Powerscourt Estate www.powerscourt.ie The museum is spread over three rooms in the magnificent Powerscourt House. The Estate features award winning gardens, an 18 hole golf course and the 5 star Ritz Carlton Hotel.

Gathering events will take place every day of every month of the year, in every county. We would hope to organise our Gathering for May 17th 2013 (date is flexible). If you would be interested in attending can you contact me, Nicola O’Connor at marketing@taraspalace.ie or call +353 86 8607068.

Posted on March 13, 2012 by Tara's Palace Museum of Childhood

Our very own volunteer Keith Dungan has given, on loan, his prized collection of model Fire Engines and some model cars including a Ferrari Testa Rossa and an E type Jaguar. The models are of European and American emergency vehicles made by Dinky, Corgi and Matchbox. Some are in mint condition, others have served their time in a playroom and show it! Scales vary from 1:72 to 1:43.

All of these models are now on show at the museum located on the first floor of Powerscourt House, Enniskerry, Co. Wicklow.

Future exhibitions by Keith will feature:

Posted on March 8, 2012 by Tara's Palace Museum of Childhood

Vivienne Dayrell-Browning was born on August 1 1905 and brought up in England and the Continent. “My childhood,” she said, “was spent moving house, which I hated.” She was a precocious child: when she was 13 a book of her poetry, The Little Wings, was published at the behest of her mother. “I felt,” Vivien recalled, describing her embarrassment at the publication, “as if I should go up in flames”. Vivien married the author Graham Greene in 1927.

During the war Vivien Greene and her children lived in Oxford after their house in London had been bombed. At a local auction she came across an old dolls’ house which so charmed her that she bought it and took it back on the bus with her that day. As war raged and her marriage disintegrated, she restored and furnished the dolls’ house, and began collecting others, filling the Greenes’ rented home with her miniature world. The art critic John Rothenstein, on a visit to the Greenes’ house, noted dryly that while Vivien was “attending to the needs of multifarious tiny, fragile objects, Greene looked on with a detached eye”.

After the marriage ended, she travelled the world to add to her collection, and in the 1960s Greene gave her the money to build the Rotunda, a dolls’ house museum at her home near Oxford. By the mid-1990s, the Rotunda contained some 41 miniature castles, cottages and manors, all furnished down to the last tiny piece of porcelain. Her expertise in the field of historic dolls’ houses and their social history was such that she received visitors from all over the world. She herself continued to travel widely, despite failing eyesight. Vivien Dayrell-Browning Greene died in Oxfordshire at the age of 99.

How Old Is Teddy? Vintage Teddies at Tara’s Palace Museum.

Posted on February 28, 2012 by Tara's Palace Museum of Childhood

There are several features that help to determine the age of a vintage teddy:

Posted on February 26, 2012 by Tara's Palace Museum of Childhood
Lots of things happening at Tara’s Palace Museum of Childhood for St. Patrick’s weekend 2012.
Home to Ireland’s Largest Period Doll House (Tara’s Palace) and the Smallest Doll in the World, we will have a special quiz testing your knowledge of the customs, traditions and celebration of St. Patrick’s Day running from March 1st.
There will be a “Find the Leprechaun Competition” running during the festival weekend and FREE face painting between 2 and 4pm on Monday, March 19th (Bank Holiday). For more information on the museum go to our website www.taraspalace.ie 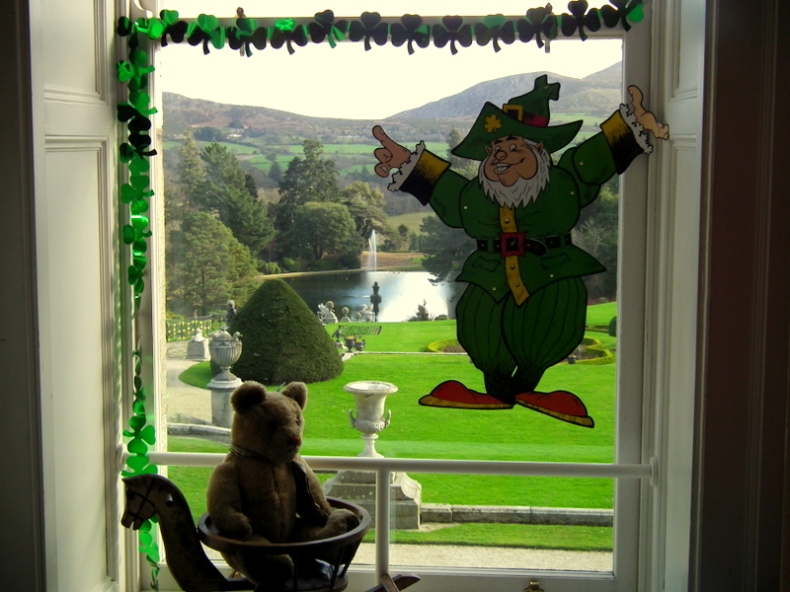 Posted on January 17, 2012 by Tara's Palace Museum of Childhood

At Tara’s Palace children can see Ireland’s largest doll’s house, tiny works of art in miniature, a variety of other dolls houses and toys dating back 300 years. They can try our Museum Quiz and have fun in the interactive room playing with toys and/or colouring pictures. All children will receive a prize for entering the quiz. The cost per child is only €2.50 from which a donation is made to Irish children’s charities. There is no charge for supervisors.

Coach parking is available on site. There is a courtyard area for children to have their picnics. The Avoca Terrace Cafe has a large selection of food including salads, soup, sandwiches, hot meals and delicious cakes and pastries. There are plenty of open spaces for children to explore after their visit and lunch.

A visit to the Powerscourt Garden or Waterfall can be included in your visit. Call Powerscourt on 01 2046000 for bookings and prices.